A collaboration with Dentsu Lab Tokyo

The age of Surveillance Capitalism is here. In the taxi, AI forces “men” to watch shaving cream commercials regardless of their real gender identity. At the airport, you are identified and can be labeled as “dangerous.” The system transforms our everyday behavior into data and abuses it for efficiency and pursuit of profit. On the contrary, we have no way to protect ourselves from information exploitation. We need camouflage. We need clothes to live in a society that exploits our identity.

Surveillance capitalism is here. Surveillance cameras are now installed outside the homes as well as in public places to monitor our activities constantly. The personal devices are recording all personal activities on the Internet as data without our knowledge. Unfortunately, the widespread use of the devices is contributing to exploit information for social efficiency and profits. The physical body is not an exception. With the development of biometric data and image recognition technology for identifying individuals, the information in real space is instantly converted into data; thus, our privacy is threatened all the time.In the situation, what does the physical body or choice of clothes mean? In order to raise such a question, we created a garment “UNLABELED. “ The specific pattern printed on the garment was generated by an AI model to fool the image recognition model. With wearing this garment,  the wearer will not be recognized as a human by the surveillance camera. Therefore, this garment can protect our fundamental human rights from excessive monitoring. In today’s world, where other people and AI keep an eyes on us, how can we assure our well-being?  “UNLABELED” aims to bring a discussion from two different perspectives; respecting fashion history, how can we update its cultural aspect when AI is involved? /  How should/can we establish a healthy relationship between the latest technology and our lives?  Throughout our project, we seek an alternative camouflage for the 21st century.

This project is inspired by a technology called ”Adversarial Examples”. It is a technique that fools AI-based image classification by adding small noises, almost invisible to the human eyes. Many researchers currently work on this issue from the security point of view; however, in this project, we try to turn this shortcoming against surveillance and protect our privacy. We aimed to evade being recognized by AI surveillance cameras by installing generated Adversarial Examples as clothes and wearing them in the real world. Considering the actual production as clothes, we made 3D models of human bodies, embedded generated patterns on the models, and used the 3D-simulated images as training data. YOLOv2, a popular AI image recognition model, as a target, another AI continuously updates the patterns to minimize the probability of being recognized as a “person.” By repeating the process of producing training data within 3D-simulation and updating the pattern, we succeeded in generating effective Adversarial Examples even when worn as clothes in the real world.

In order to create the garments, there were two different phases, before and after machine learning. First, we 3D-scanned several people. Then those 3D data were imported onto Blender, the 3D modeling software to add bones to the bodies. In order to add various realistic posture and motions, we used Adobe Mixamo.  After adding the motions to the avatars, the avatars were imported to CLO3D, the garment simulation software. With fixed 2D-pattern of the camouflage coat, we successfully created 3D simulated the garment with the avatars as the training dataset. Once the adversarial pattern is made,  we lay them out onto the 2D-pattern. Then, the pattern was printed onto plain polyester blend fabric with transcription. After printing, we followed the general garment production procedure: pattern-cutting, sewing, and finishing. 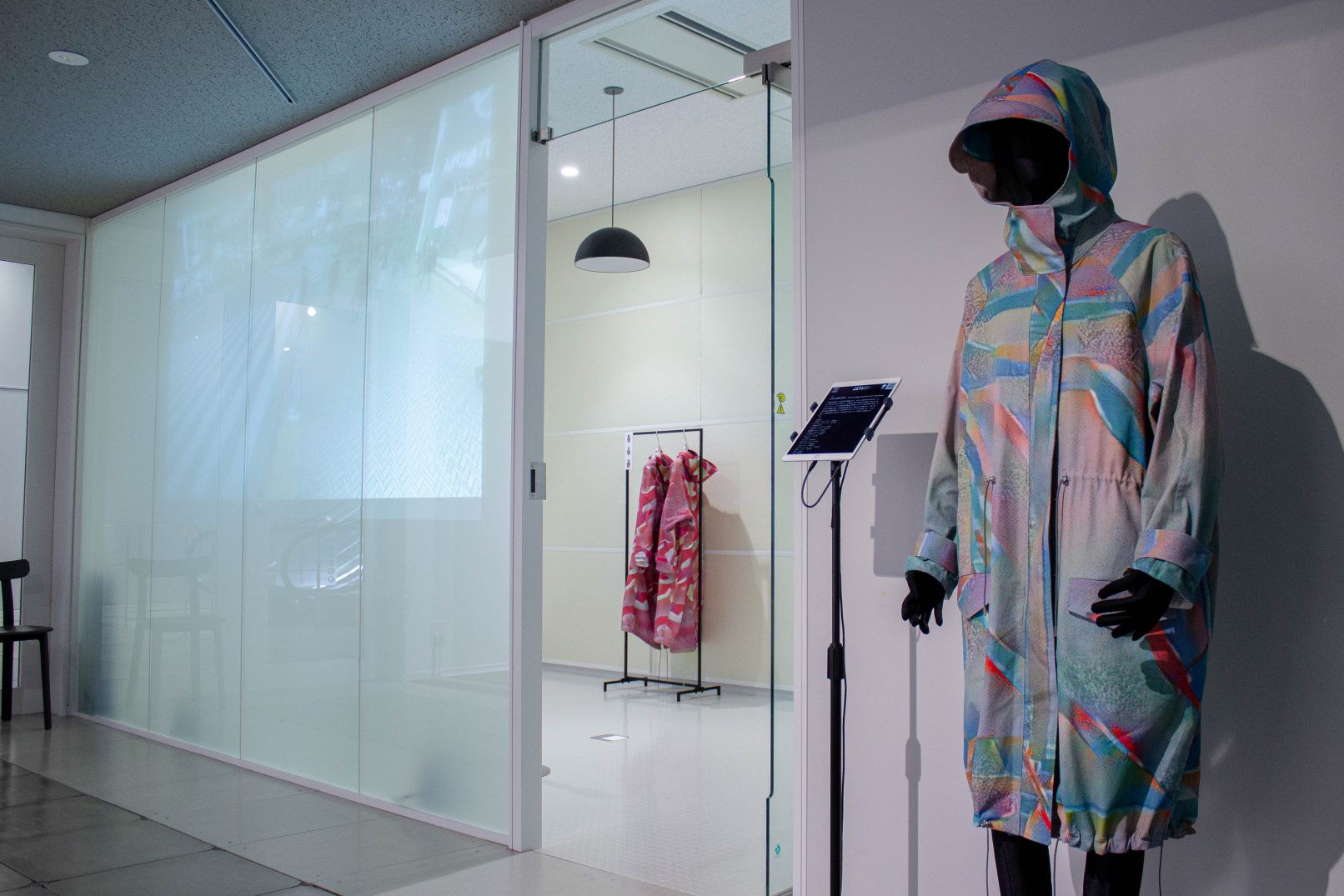 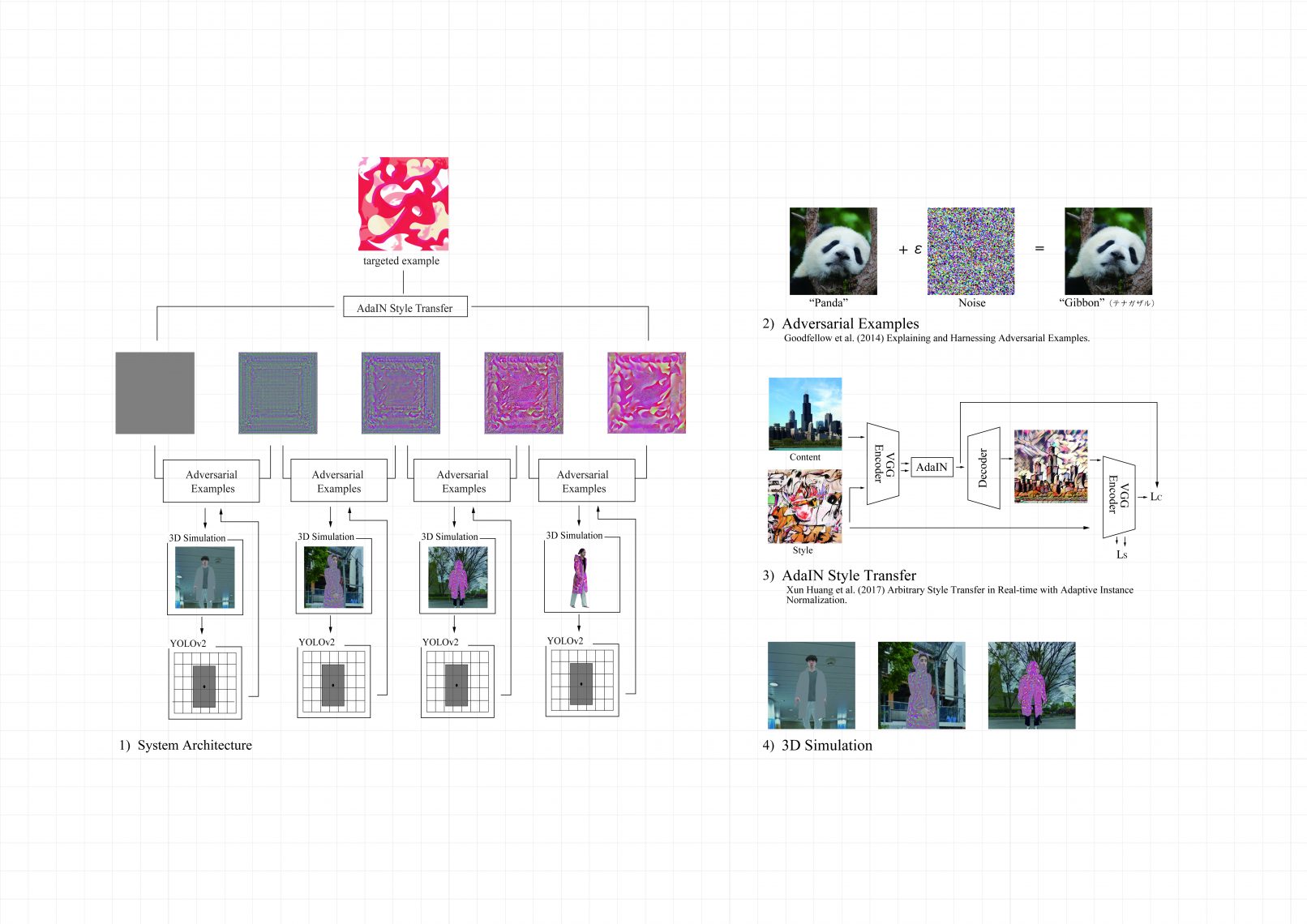